Draft Law on Gender Equality: Will (Just Any) Amendment to the Law Lead to the Improvement of the Situation?

Although the European Commission’s progress reports on gender equality in Serbia are modest in both scope and content, with relatively moderate conclusions, they still indicate insufficient activity and commitment of the state, reflected in the lack of implementation or (serious) delays in planned activities. What is missing from these progress reports, however, are comments on the quality of changes - amendments and supplements to laws made with the aim of aligning them with the acquis communautaire - and the effects of implemented measures and activities on the actual state of human rights, including the rights of women, and the achievement of equality of women and men in all spheres of public and private life.

In relation to the topic of non-discrimination and the status of vulnerable groups (3.6), the Action Plan (AP) for Chapter 23 - and the recommendation issued following the screening process (3.6.1) - aims at improving the position of women and promoting gender equality, along with the establishment of effective mechanisms for monitoring the state of affairs, listing positive reports of relevant domestic and foreign bodies as indicators. Two key activities have not been implemented in the area that is the focus of this text: no amendments and supplements were made to the Anti-Discrimination Law and the Law on Gender Equality, although this was an activity that was planned for the year 2016. Reports on the implementation of the Action Plan for Chapter 23 contain only information concerning the activities related to the preparation of the draft law, but there is no information about its content, i.e. changes that were made to it in accordance with set goals.

The European Union accession policy notwithstanding, the standards that are relevant for the Republic of Serbia are in fact the ratified international treaties. The Action Plan for Chapter 23 does not mention the obligations stemming from the Convention on the Elimination of All Forms of Discrimination against Women, nor the Concluding Observations and Recommendations of the United Nations (UN) Committee on the Elimination of Discrimination against Women, submitted to the Republic of Serbia following the previous evaluation of the situation (2013). In addition to expressing a series of concerns regarding the actual state of affairs, the UN Committee requested that Serbia plan and implement a range of measures and activities that were not considered to a sufficient degree when the amendments, supplements and new statutory solutions and policies were created. Also, it requested that civil society organisations, especially women’s organisations, be consulted in this process.

As regards the status and discrimination of women in Serbia, it is not easy to define the objective situation in different spheres of public and private life due to the insufficient number of gender-sensitive statistical data and research, as well as non-existent or very poor mechanisms for monitoring the application of planned measures and activities and their (real) effects. Indicators provided in the gender equality index show a slight improvement of the situation in the period 2014-2016, primarily in the area of participation of women in politics (which is a direct consequence of the quotas prescribed by the laws governing elections). Very modest progress was registered in all other areas, as well as stagnation or deterioration which was noted in some sub-areas. Although the opposite might be expected, women consistently submit fewer discrimination complaints. Based on the report on the implementation of the relevant Strategy’s Action Plan, it is not possible to accurately determine what activities, and amounts, were planned and implemented when it comes to improving the position of women, including those from groups that are marginalised on multiple grounds. Numerous measures from four key areas have either not been implemented, or their implementation was quite modest: integrated policy, prevention, protection and support of victims of violence. All available data confirm that sexual and reproductive rights and the health of girls and women are not being exercised in full.

The European Union’s gender equality policy, contained in the strategic document for the period 2016-2019, defines five key areas that require action, including the prevention of gender-based violence and the protection and support of victims, as well as promotion of gender equality and the rights of women worldwide. Strategic EU documents also include the right of all to fully control and freely decide on their sexuality and sexual and reproductive health.

Amendments and supplements to the anti-discrimination policy in Serbia have been planned in order to harmonise the country’s legislation with the EU acquis. However, the way in which they were organised speaks of the absence of transparency, inclusion and impact of civil society organisations, especially women’s organisations that advocate human rights. Not only are the measures not compliant with the accepted international standards and the existing primary and secondary legislation of the Republic of Serbia - which in some respects represents a reduction of the previously attained rights of women - but there is also no responsibility for the application of all the provisions, and the consequences of non-compliance are thoroughly insignificant.

All this clearly confirms that the Ministry of Labour, Employment, Veteran and Social Affairs, as the authority in charge of the anti-discrimination policy (since July 2017), is obviously distancing itself from human rights policies and standards, including women’s rights. Not only does transparency of the process of amending and supplementing the law depend on the will of the line Minister, but the adoption of the proposed draft in the course of a public debate also fully reflects the conservative attitudes of the Ministry/Minister, and not the confirmed human rights standards, including international obligations the Republic of Serbia has already assumed and the already reached level of legal protection. Inconsistent definitions of concepts and statutory solutions will create legal confusion, and the lack of concrete responsibility for enforcement and the lack of consequences in the event of non-compliance (in the areas analysed in this text) indicate that the implementation of the new Law on Gender Equality will be weak, much like the implementation of the existing one has been.

Although the competent Ministry has shown ignorance concerning some of the elements, one could not conclude that the “harmonised” version of the Draft Law on Gender Equality comes as a consequence of that. To the contrary, it shows an explicit intention to control and limit the possible impact of progressive statutory solutions on the rights and position of women in Serbia. The way this is done by the competent Minister confirms the thesis on the “captured state”. Therefore, it can be concluded that the new Law on Gender Equality will not lead to any fundamental changes that would improve the rights and position of women.

For these reasons, and taking into account the EU’s gender equality policy, the European Commission should pay much greater attention to the content of the planned reform activities related to the topic of non-discrimination and the status of vulnerable groups, and should clearly acknowledge, in the progress reports of Serbia, the content regression instead of just mentioning the delay in the realisation of planned activities. 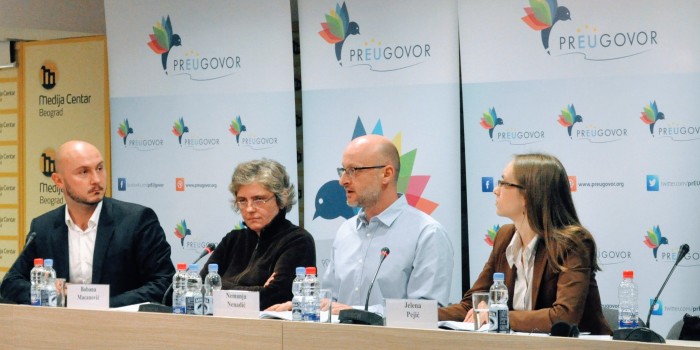