The analysis explains various aspects of the importance of democratic elections in candidate countries from the point of view of meeting the Copenhagen political criteria, and presents the key documents through which the European Commission monitors the implementation of standards related to elections, electoral campaigns and their financing in the Republic of Serbia.

The key part of the study is the review of the findings of the OSCE/ODIHR observation mission provided after the elections for the President of the Republic of Serbia that were held in early April 2017. Through comments on the recommendations of the OSCE/ODIHR mission of 2017, as well as the unimplemented recommendations from 2017, the author stresses the key regulatory and practice reforms that should be implemented in order to solve the most serious problems.

The analysis does not encompass all issues that may potentially be related to elections (e.g. the electoral system). The focus is placed on topics regarding which it can reasonably be assumed that the situation could change as part of the Serbia’s European integration. The search for the starting point for comments contained in the OSCE/ODIHR recommendations was caused by the fact that the European Commission does not provide its own recommendations regarding the election process and electoral campaigns, but instead encourages candidate countries (including Serbia, on several occasions) to respect what ODIHR recommends. In practice, however, most of the ODIHR recommendations provided after the previous election cycles have not been respected, which consequently causes the scope of the reforms to be implemented to expand almost every year (considering also the frequency of extraordinary elections).

The study also touches upon the issue of the Action Plan for the European integration Chapter 23 and its implementation. This planning document is mentioned in the context of the consideration of certain findings and recommendations of the EC and ODIHR. The conclusion is that the activities that have been defined in the Action Plan have not been planned - from the beginning - so as to facilitate the resolution the problems that are now recognised in international reports, and that not even the measures that have been identified as necessary to implement in 2015 and 2016 (or even earlier, in the Action Plan for the implementation of the National Anti-Corruption Strategy 2013) have not been implemented. This primarily refers to the failure of the executive and legislative authorities in Serbia to prepare and adopt amendments to the Law on Financing Political Activities which, according to the deadlines set out in AP for Chapter 23, should have been done by the end of 2016 based on the EU expert’s analysis from that year.

The lack of response by state authorities to the findings of international observers regarding this issue was particularly emphasised, as it indicates the relatively low importance that Serbian authorities attach to this segment of European integration. Consequently, this also indicates that the significance of the issue has not been recognised by EU officials to date, or that this issue is not positioned sufficiently high on the list of EU Integration Priorities.

The final part of the analysis presents some of the findings of the monitoring that was conducted by Transparency Serbia before, during and after the April 2017 presidential elections. Although monitoring included a wide spectrum of activities of public officials, political subjects and the media, the analysis presents and provides details of the findings that refer to the (lack of) action of the relevant state bodies - the National Assembly of the Republic of Serbia, the Regulatory Body for Electronic Media, the Republic Electoral Commission, the Anti-Corruption Agency and the Public Prosecutor's Office. Findings from the previous period have been supplemented by the results of new surveys on the subsequent acting of these state authorities over the past six months (the publication of findings of the partial RBEM monitoring, the controversial decisions of the Anti-Corruption Agency in some cases, pronounced interest of the public in the findings of the Agency and the absence of reaction of the Public Prosecutor’s Office in earlier cases, review of the legality of the financing of election campaigns, etc.).

Finally, the study presents key findings and recommendations that follow from the above. They are intended for the state authorities of the Republic of Serbia, EU institutions, as well as the media and civil society organisations in Serbia. 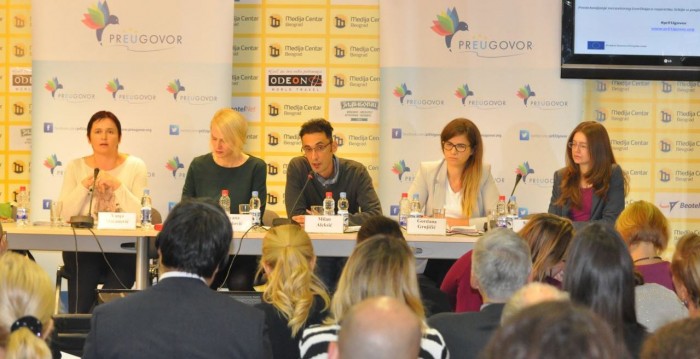