The state of emergency introduced due to the pandemic only exposed, accelerated and deepened the trend of state capture and the collapse of standards of democracy and the rule of law in Serbia, is the conclusion of the online conference presenting the new prEUgovor Alarm Report on June 10, 2020. The presentation focused on election conditions, the state of media freedoms and the position of migrants in Serbia. 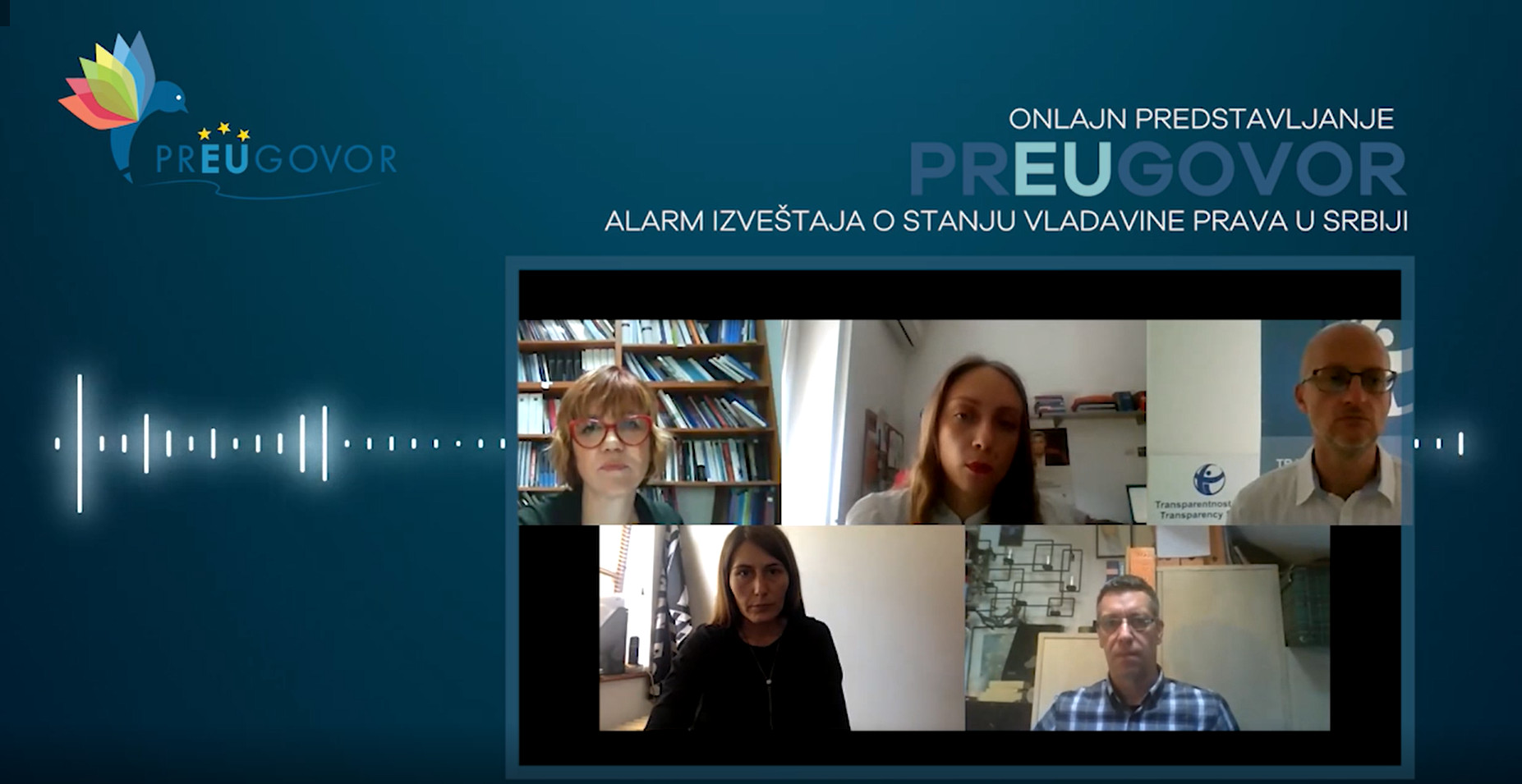 PrEUgovor’s monitoring of reforms in chapters 23 and 24 and certain political criteria of EU accession process indicates that, in most fields, the tendency of deterioration has continued during the period from October 2019 to April 2020. This was further exacerbated during the COVID-19 pandemic in the last two months, especially after the state of emergency was declared on March 15, it was highlighted in the new Alarm Report.

The Report notes the principles of separation of powers and checks and balances are fading out, the institutions are dysfunctional, and even those that should be neutral and impartial, such as the police, judiciary and independent oversight bodies, are acting on a selective basis under illicit political influence, said Jelena Pejic Nikic, researcher at the Belgrade Centre for Security Policy and editor of the Alarm Report.

“As a result of this, in the system of fighting corruption and organized crime mostly small fish get caught, while the sharks are still on the loose. The passivity and lack of interest of the highest institutions, such as the National Assembly and the Constitutional Court, to do their job is especially alarming”, she noted.

Attendants at the conference agreed that the state of the rule of law in Serbia deteriorated in the reporting period (October 2019 - April 2020), and as the most alarming case among those enlisted in the online poll they chose the inaction of the competent institutions (85%) and the Krusik affair (54%), the moderator Danica Vucenic reported.

During the discussion, it was pointed out that, instead of positive results of the reforms, the reporting period was marked by scandals. One of the most important is the so-called Krusik affair, which is cited as a textbook example of a captured state.

“The Krusik affair revealed a series of problems - pumping out resources from a public company into the private pockets of people close to top officials, a conflict of interest that the Anti-Corruption Agency decided to ignore, the state's retaliation against an unprotected whistleblower, a divided media scene. Even when the State Audit Institution published its report on the audit of the company Krusik, finding a number of irregularities - few people actually heard about it”, explained Pejic Nikic.

Procrastination, reversal, and even simulating reforms in order to get a positive assessment on paper, while ignoring the basic values and purpose of the reforms, is already a sufficient indicator of the Serbian government's commitment to European integration, she noted.

“We have not had a chief of the Negotiating Team for months, and we do not have a decision on whether Serbia will accept the new enlargement methodology. While this methodology emphasizes that the declarative commitment to integration will be monitored, even the highest officials behaved the opposite - they belittled and criticized the EU, and overemphasized the "brothers" from the East”, Pejic Nikic added.

An attempt to improve election conditions in Serbia through dialogue came last fall, primarily as a result of pressure and interest from Brussels-based institutions. However, the Serbian authorities have taken a minimalist approach, so that the adopted legal amendments cannot significantly improve the situation in this area, said Nemanja Nenadic from Transparency Serbia.

“Minor legislative changes were pompously adopted, but they did not solve the biggest problem of election campaigns for decades now - the problem of public officials’ campaign, which implies using the opportunity to provide additional political promotion through allegedly regular activities of public officials”, Nenadic emphasized.

Last-minute amendments to the Law on the Election of Deputies, which were not mentioned at the previous dialogue on election conditions, showed that the Government's alleged inability to implement comprehensive legislative reforms in 2019 "so as not to change the election law in the election year" was just an excuse for lack of political will, he pointed out.

When it comes to the fight against corruption, the maintenance of acting positions in public administration, especially in public companies, as well as the exclusion of the largest infrastructure projects from the general rules of public procurement are grounds for alarm.

The increasingly loud anti-immigrant rhetoric in recent months has been worrying, and has been easily transferred to the public media space from social networks. Unfortunately, it could also be seen on the streets of cities across Serbia, at sporadic protests in February and the first half of March. The election campaign is not the only cause for such rhetoric. Significant factors are ignorance, prejudice, fear of the unknown, explained Miroslava Jelacic Kojic from Group 484.

“The biggest concern was caused by the appearance of the so-called people's patrols that intercepted migrants in Belgrade and threatened them. We had a reaction from the police and the prosecution, but we do not yet know the results of the investigations. Recently, in Obrenovac, we saw a car intrusion into the Center for Accommodation and Reception of Migrants. It is additionally worrying that the event was broadcast live on the social network Facebook and later shown in all other media. A few days ago, the perpetrator was sentenced to eight months in prison”, said Jelačić Kojić.

Serbia welcomed the pandemic and the state of emergency by showing a stable consistency in the field of media freedoms - a steady decline in various international indexes. The Government Conclusion from March 28 introduced formal censorship, which led to the arrest of the journalist of the Nova.rs portal. This act is only the culmination of the measures taken by the Government towards the media, pointed out Branko Cecen from the Center for Investigative Journalism of Serbia (CINS).

“Censorship means that the state has a formal way to decide what is and what is not allowed to be published in the media. We were in a situation where a journalist faces a sentence of 3-5 years in prison if they publish something about the epidemic that didn’t originate from the Pandemic Crisis Task Force. It is important to know that something like that cannot be an innocent mistake. What can we expect the next time the Government feels threatened by reporting of the few independent and professional media in Serbia, regardless of the fact that they reach a small percentage of citizens”, he warned.

During the state of emergency, access to information of public importance, including to information related to public health, was de facto suspended.

“The best example of information of public importance during a pandemic is how many ventilators Serbia has, where they are located and whether they are functional. The government not only withheld that information from the public, but also declared it a secret”, Cecen reminded.

The Alarm Report regularly serves as a reference to the European Commission in the preparation of regular reports on Serbia's progress on the European integration path, but also to other domestic and international organizations, it was stated during the conference.

You can watch the full recording of the conference here (only in Serbian).

The conference is part of the project "PrEUgovor Monitoring Reforms in Chapters 23 and 24", funded by the Embassy of the Kingdom of the Netherlands in Belgrade.