Serbia Made no Substantial Progress in Chapters 23 and 24

Some progress was made in the process of normalisation of relations between Serbia and Kosovo, drafting the new Law on Police and establishment of the Office for Asylum, whereas no progress was made in the area of rule of law, gender equality, preventing violence against women, protection of the victims of trafficking in human beings, systemic management of migrations, were the conclusions of the prEUgovor network’s representatives. 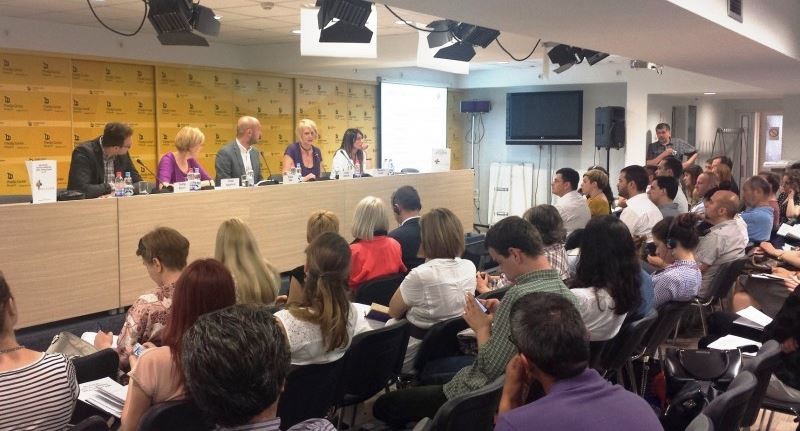 Serbia made limited and uneven progress in the area of policies covered under chapters 23 and 24 of the accession negotiations with the EU, it was stated at the occasion of presenting the fourth semi-annual independent report of prEUgovor coalition, which took place on 4 June 2015 at the Media Centre in Belgrade.

It is essential that the Government of Serbia should invest significant efforts to assure that the principle of the rule of law is respected, as well as better coordination between state institutions. In addition, it is important that, as soon as possible, effective mechanisms for the protection of rights of victims of criminal acts are established, as well as to allow for inclusion of civil spociety organisations in the process of monitoring Action Plans for chapters 23 and 24, it was noted at the conference.

“The period from October 2014 to April 2015 was marked by three key events: drafting of Action Plans for chapters 23 and 24; drafting of and public consultations regarding the adoption of the new Law on Police; and pressure of the Government on the functioning of independent state institutions,” noted BCSP’s researcher Bojan Elek, one of the editors of the report that was compiled by seven civil society organisation.

Elek pointed out that some progress was made in regards to the integration of judiciary and Civil Protection Units in northern Kosovo. On the other side, there is still no progress in the process of establishing the Association of Serbian Municipalities, as well as in addressing other outstanding issues stemming from the Brussels Agreement, said the BCSP’s researcher.

“It is impossible to talk about the rule of law principle if the application of laws is dependent on the political will,” stated BCSP’s Executive Director Predrag Petrović.

When it comes to the civilian and democratic control of armed forces, backsliding in this area was evident if the difficulties some independent state institutions faced in the process of supervising the security sector are taken into account, said the BCSP representative.

“Although the European Commission clearly states that the rule of law is a priority area for Serbia, if judged by the events that took place during the previous six months it is safe to conclude that those in power in Serbia could not care less about the rule of law. This is best seen when analysing the relation between the executive branch, and Government in general, towards independent state institutions, especially the case of Ombudsman. The Government’s representatives also denounce the authority and competences of the Commissioner for Information of Public Importance and Personal Data Protection over security sector. In addition, we are all witnesses of the protracted process of reforming the Anti-Corruption Agency that is preventing this institution from acquiring greater powers,” Petrović said.

BCSP’s Executive Director identified the process of drafting the new Law on Police, with participation of public, as an area where progress was made as an introduction into the police reform at the normative level.

ASTRA’s representative, Ivana Radović, pointed out that, based on the data obtained from an analysis of sentences related to the criminal act of trafficking in human beings, it is evident that the treatment of victims in court procedures is still unsatisfactory, claiming that “ those accused for the criminal acts have better procedural safeguards than the victims of those act.”

Further problem is the repetitive victimisation of the victims, due to extremely long trials, frequent repetitions of depositions and facing the accused, as well as the attempts to obtain financial compensation in the processes that last for many years. According to Radović, the victims are mostly women and children, although 2014 was an exception with 80% of victims being males, mostly workforce that was exploited in the construction sites in Russia. On the other hand, the average sentence for the criminal act of trafficking in human beings in Serbia is 3.9 years, stated the ASTRA representative.

Tanja Ignjatović from the Autonomous Women’s Centre brought up the issue of increase in gender-based violence and the reckless approach towards the gender issues in chapters 23 and 24.

Ignjatović expressed her concerns about the implementation of the antidiscrimination polices and the Law on Gender Equality, as well as about the lack of transparency and criteria for electing the new Commissioner for Equality. She pointed out that in October 2014 the Directorate for Gender Equality was terminated, and that the newly established Coordinating Body for Gender Equality only has one position out of six filled by a woman.

The AWC’s representative also pointed out that the Action Plan of the Body is not in line with the Action Plan for Chapter 23 concerning the aspects related to gender equality—not when it comes to deadlines, budgetary provisions or institutions in charge, although the suggested measures and activities are similar.

Miroslava Jelačić from Group 484 claimed that no significant progress was made in the areas of migrations and asylum. Serbia failed to prepare itself for the migrations across its territory, there are no defined procedures for irregular migrants and there are difficulties with implementing the readmission agreements that are in place with the EU Member States and the neighbouring countries, stated Jelačić.

She also brought up the issue of the alarming statistics pertaining to the rapid increase in the number of migrants who might even reach 40.000 before the year ends. Due to the fact that there exists a lack of capacities for accommodation of asylum seekers at the local levels, Jelačić recommended that the budget allocations for these purposes need to be increased.

As a sign of progress, the Group 484 representative mentioned the establishment of the Office for Asylum in January 2015, as well as the fact that there were no humanitarian crises outside of the asylum centres.

More than 70 participants were present in the audience, including representatives of the Ministry of Justice, Ministry of Interior, Office for the Cooperation with Civil Society, embassies of Germany, UK, USA, Russia, Switzerland, Denmark, Romania and Croatia, representatives of OSCE Mission in Serbia, UN Office, EU Delegation in Serbia, numerous foundations, civil society organisations, academia and the media. In the Q&A session of the presentation, questions from the audience were raised on the issues of minority inclusion, relations between external and internal migrations, as well as the implementation of the Council of Europe’s Istanbul Convention.