From Controversial Veto to Constructive Proposal: What to Expect from The Debates on Reforming the European Union's Enlargement Policy?

Even before the French veto for North Macedonia and Albania, it was clear that the EU enlargement policy in the Western Balkans was showing serious signs of weakness and needed to change. Following a decision that met with criticism in mid-October both in the region and within the EU, France proposed a reform of the enlargement policy. It is only a fraction of a broader and deeper internal reform of the EU advocated by Emanuel Macron and without which, in his view, the further enlargement is out of the question. BCSP Researcher Jelena Pejic Nikic and BCSP Intern Uros Milovanovic analysed this issue.

The article is part of the 20th newsletter rEUformator - informator about chapters 23 and 24.

What do the French want?

At the European Council meeting on October 17-18, the French president prevented North Macedonia and Albania from being assigned a date to begin EU accession talks. Denmark and the Netherlands were reserved only towards Albania, but the French were the loudest - there will be no enlargement before the EU’s internal reform. Outgoing European Commission President Jean-Claude Juncker called the move a "historic mistake". The Union’s enlargement policy has been seriously shaken by its failure to award these countries for the extraordinary efforts they have made, especially North Macedonia after its great reform momentum and the Prespa Agreement.

It could be speculated what motivated this move - a genuine desire to reform the accession process, the need to put more pressure on Germany and other member states for internal EU reform, or perhaps the reasons of domestic politics before the French 2020 local elections, the French shortly thereafter proposed an enlargement reform in a non-paper.

In its proposal, France clearly supports the continuation of enlargement but considers that the current accession mechanism is inefficient, that it is too time-consuming and that, due to the inadequate structure of the negotiations, the candidate countries are failing to properly prepare for their future role within the EU. Emphasis is placed on four key principles, on which a renewed approach to negotiations should be based:

The pillars of the proposed accession process

The French suggest that negotiations should be organized to allow gradual access to EU policies, programs, and structural funds. Negotiations would take place in successive stages, built around cohesive blocks of EU policies, and taking into account specific characteristics of each candidate. Under this proposal, instead of 35 thematic chapters, we would have seven phases of accession, starting with the policy block now covered by Chapters 23 and 24 (Rule of Law, Fundamental Rights, Justice, Freedom and Security) to Foreign Policy (now Chapters 30 and 31) and other issues (currently Chapter 35). For a candidate country to move from one phase to another, it is necessary to meet precisely defined criteria.

The proposal empowers the EU to respond proportionally, in the event of stagnation or regression of reforms in the candidate country, with instruments ranging from blockade to suspension of the accession process.

France considers that the current mechanism of the negotiation process is not good enough, as it fails to unite all the relevant EU actors and to harmonize their joint action leading to further European integration. Under this proposal, Member States' role in decision-making would be strengthened. The Commission would monitor candidates’ progress, the Member States would participate in the monitoring by evaluating Commission’s work, while the Council would be strengthened due to the increasing involvement of the candidate countries in sectoral policies. Support for further enlargement should also be confirmed at the highest political level at the annual meetings of the European Council with the leaders of the Western Balkans states.

The French proposal has received different reactions from European officials and the expert community. The Serbian Minister for European Integration Jadranka Joksimovic believes that the new accession methodology proposed by the French could not apply to Serbia and Montenegro, as negotiations with both countries have already started and it is not fair to change the rules during the game.

Six EU Member States committed to enlargement (Austria, Slovakia, Slovenia, Poland, Czech Republic, and Italy) reacted by sending a letter to the European Commission. They stress their desire and willingness to engage in improving the accession process of the Western Balkan countries, which has so far proved "slow and uneven". In a slightly expanded composition, largely consisting of the countries that acceded to the Union in 2004, a group of nine Member States has submitted a counter-proposal. They agree that the negotiating chapters should be grouped into eight main areas, which can be opened and closed jointly but believe that this should be done in parallel rather than successively, as required by the French proposal. Also, the counter-proposal differs from the non-paper in that these countries believe that opening accession negotiations with Albania and North Macedonia will not hamper reform. Stronger cooperation is recommended by holding annual summits of the European Council with Western Balkans leaders, greater participation of WB countries in some meetings of the Council of Ministers, as well as in the working bodies of the Council and the European Commission. Emphasis is also placed on holding "European Conferences" across the region to promote dialogue and cooperation.

Shortly after France had said ‘non’, even before the French proposal, the expert community wanted to restore the enlargement policy by advocating a horizontal, sectoral approach to integration - gradual membership instead of instant membership (although after painstaking transition decades). This idea follows the growing aspiration to establish differentiated integration within the EU - to create closer circles of the Member States, which cooperate more closely in selected areas. The benefits for the Western Balkan countries would be reflected in greater pressure to meet the criteria (costs for not delivering would be higher), development of institutional capacities for implementing EU policies and programs, especially in the areas of public procurement, state aid and competition, which are crucial for stopping the trend of state capture through suction of public resources for private purposes. Although they would not immediately acquire full membership (the question immediately arises of whether they would ever acquire one), this form of gradual integration would carry more obligations to the candidate countries, but also more rights and more funds than is currently the case.

The problem is that the French proposal is too vague, and these issues must be addressed in detail to offer certainty of accession. For example, the EU already has strict criteria and monitoring mechanisms in place. It is not clear from the proposal how they would be promoted. An even bigger problem, according to Srdjan Cvijic, is that the whole process depends on the will and particular interests of the Member States, which can at any time veto further progress in the negotiations, as the French example has shown. That is why it is important to introduce a qualified majority decision-making system instead of unanimity. Enlargement policy reform must not allow the Member States to bypass European institutions in making key decisions.

Others warn about the fatigue in countries that have been striving for membership for nearly two decades and yet have to face uncertainty and inconsistent promises from the EU. In this regard, the unforeseeable end of the first phase of accession, as envisioned by the French proposal, would further weaken the morale in the candidate countries. As long as technical issues are being negotiated, as is the case now, the public is under the impression that something is moving forward.

For over two years, prEUgovor has been advocating a less drastic addition to the EU's enlargement policy toolbox. Candidate countries are making progress throughout the process, opening new chapters, but are declining in the rule of law area. Instruments currently at EU’s disposal are not enough to tackle the widespread corruption and abuse of public institutions for private purposes, which the EU itself has called state capture. A different instrument has been successfully tested in North Macedonia. In parallel with the high-level political dialogue, the European Commission commissioned an independent expert report on the state of the rule of law in this country. The so-called Priebe report started with dissecting an interception scandal to explain the deeper roots of state capture and propose steps to reverse the process. The fact that the report was not authored by European Commission officials allowed it to be written in a more direct language, devoid of diplomatic ambiguity, and its publication triggered broader societal pressure for reform. Recently, a similar report was drawn up for Bosnia and Herzegovina. The European Union could turn this ad hoc instrument into its regular tool for assessing the rule of law in all Western Balkan countries.

Express reform of a lengthy process?

France believes that the EU Council should request that the Commission reforms the accession process by January 2020. This is too much pressure for the Commission, which has just begun its mandate. Enthusiasts advocate completing the reform and opening negotiations with North Macedonia and Albania in March of 2020, ahead of the EU-WB Zagreb summit in May. This could also mean an express compromise reform, which would not solve key problems of the enlargement policy and might complicate it further.

Opening negotiations should not wait for reform. The veto has encouraged the launch of a debate in the EU on topics that have been on Macron’s agenda for several years. Germany and France have already come forward with a proposal to organize a Conference on the Future of Europe in 2020, which the European Council recently supported. An invitation to the candidate countries to engage in these debates, as was the case with candidates at the beginning of the century who participated in the Convention which drafted the dropped Constitution of Europe, would carry a clear message that we still share a common (and equal) future in the EU.

Negotiations ProcessDevelopments in the EU 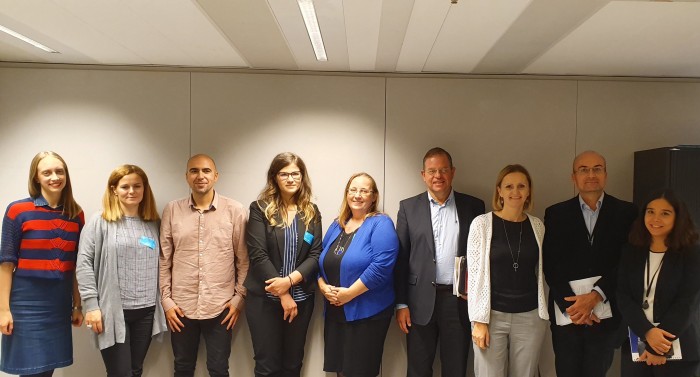