Alarm Report on Progress of Serbia in Cluster 1 - November 2022 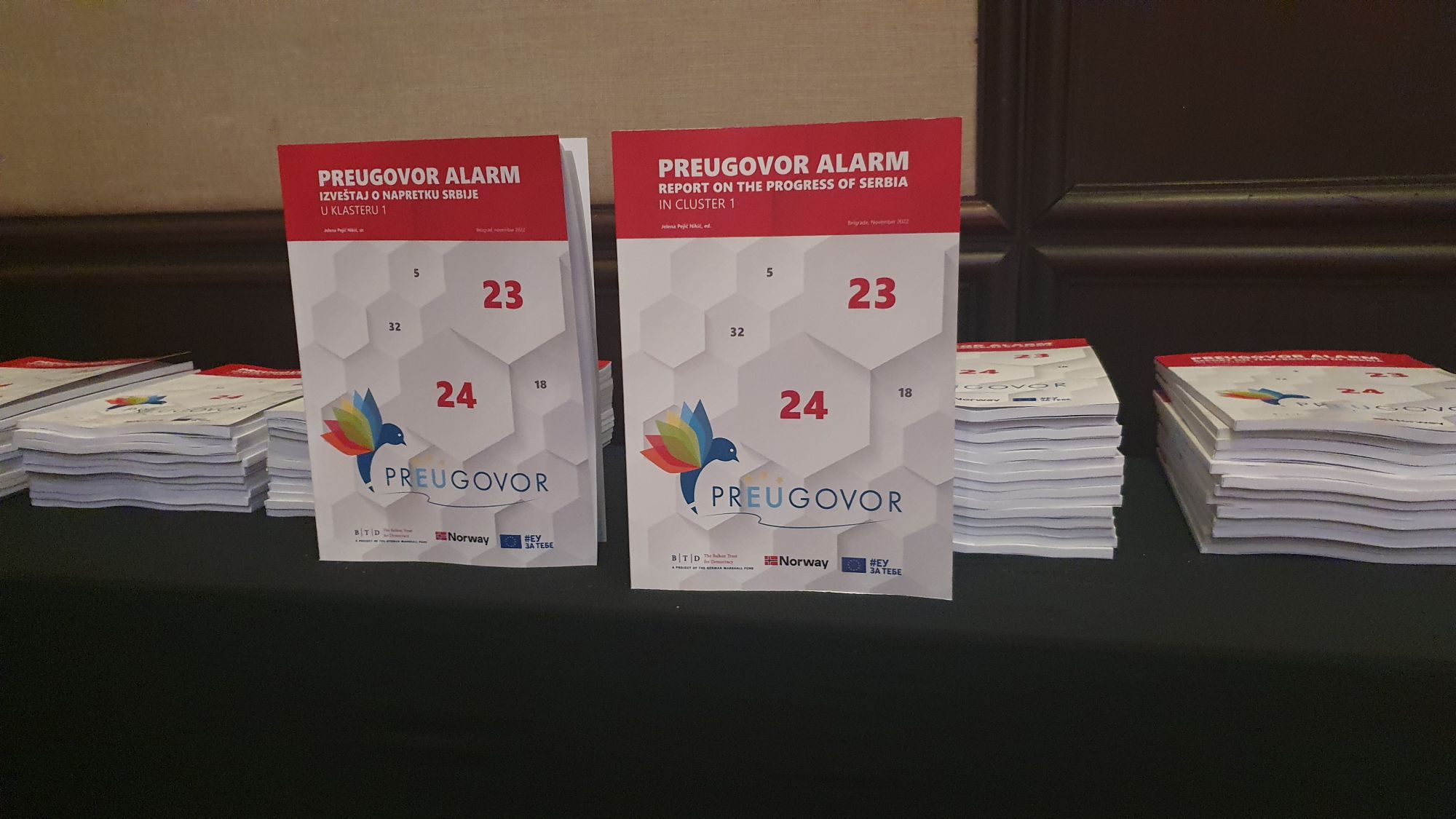 The reporting period - from May to October 2022 - Serbia spent with the Government in a technical mandate. The formation of the Government that should act as an engine of European integration waited until the deadline, even though the parliamentary majority was clear and the international and domestic circumstances demanded decisive action. Most of the reform activities in Cluster 1 have therefore been put on hold, starting with the drafting and adoption of regulations. Serbia is still far from achieving visible results in the areas monitored by the prEUgovor coalition. Moreover, in the previous six months, even the hitherto prevailing approach of “ticking the boxes”, i.e. piling up activities to feign reform efforts, was absent. The rule of law is temporarily marginalized by geopolitical considerations due to the consequences of Russian aggression against Ukraine and strained relations between Belgrade and Priština. Still, it remains at the core of European integration.

The intensive work on writing five judicial laws to implement the constitutional amendments adopted in February 2022 was an exception. As in the previous fall, this area remains the backbone of the progress that the Government is trying to present in Cluster 1 of the accession negotiations with the European Union.

Inconsistent words and unconvincing deeds have characterized Serbia’s conduct in the past period, the annual report of the European Commission from October 2022 showed. Since 2015, when the European Commission started quantifying its assessments, the overall level of Serbia’s preparation for membership has increased only slightly, and since 2020 it has not moved past halfway. In Chapters 23 and 24, which cover the judiciary and fundamental rights, the fight against corruption and organized crime, Serbia has only reached a certain level of preparation for membership. That’s a score of 2 out of 5. North Macedonia and Albania, which only opened accession negotiations in July 2022, received higher scores. Regarding average annual progress, Serbia achieved its most modest result so far and even backslid for the first time - in alignment with the EU’s foreign and security policy.

In the given geopolitical situation, Serbia’s clear positioning towards the Russian invasion of Ukraine is interpreted as crucial for expressing the country’s strategic commitment to European integration. Although Serbian officials can be criticized for sending ambivalent messages about the European Union, diverse voices about Serbia’s progress are also heard from the other side. As a result, the support of Serbian citizens for joining the EU has dropped, and such findings serve as an excuse for further delaying the adoption of critical decisions and the implementation of essential reforms.

It is necessary to revive the transformational potential of the EU enlargement policy with credible words and deeds. The coalition prEUgovor reminds that the accession process must not be a goal in itself, but a means to achieve essential progress in the further democratization and organization of the state, based on the rule of law.