Alarm Report on Progress of Serbia in Cluster 1 - May 2022 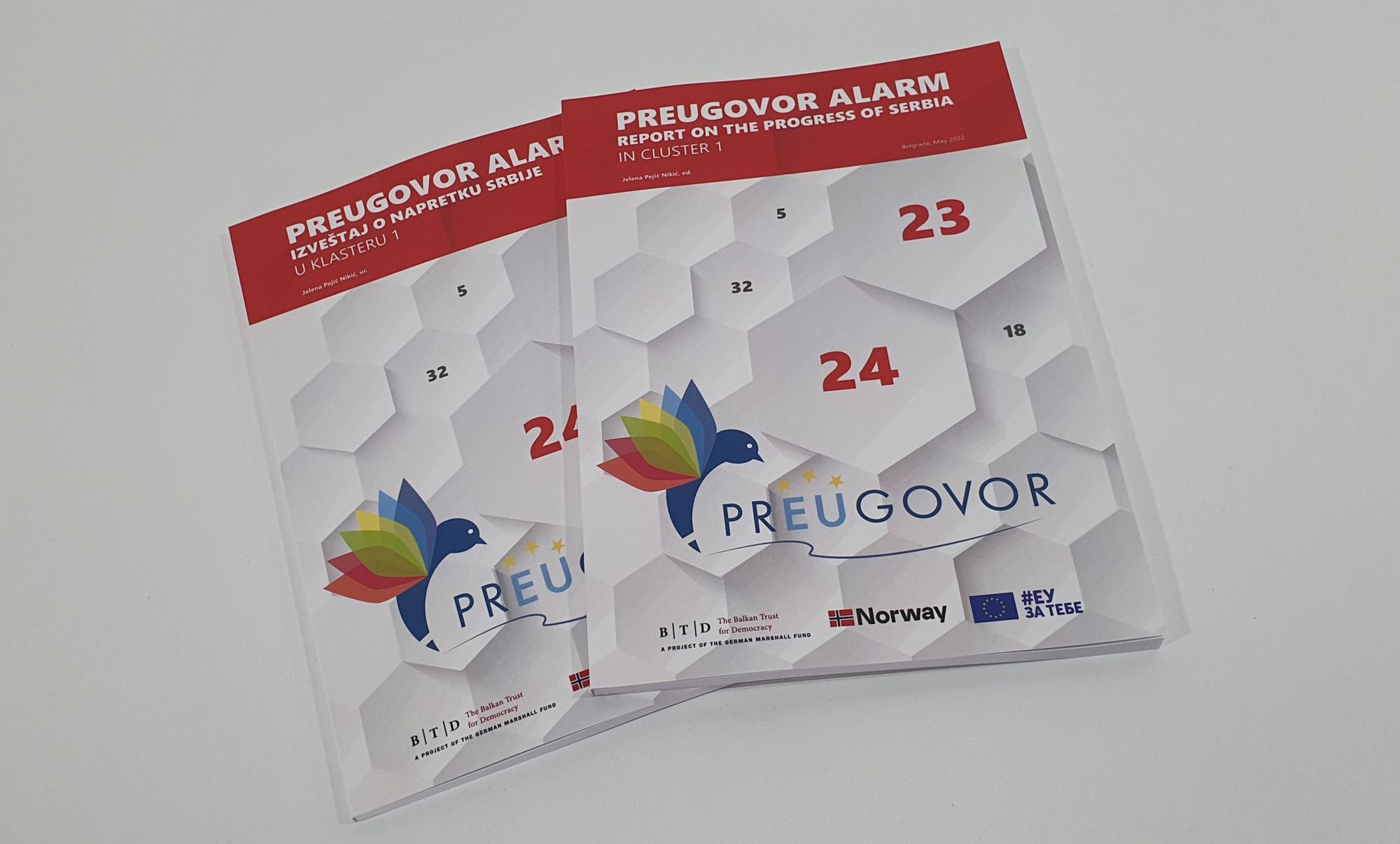 The reporting period, which lasted from November 2021 to April 2022, was marked by the referendum on constitutional amendments and the general elections with accompanying campaigns and a series of regulations that once again underwent last minute changes. Due to the lack of real dialogue in institutions and the media, in late 2021 citizens took to the streets in mass protests throughout Serbia. A significant initial step towards strengthening the independence of the judiciary was made by amending the Constitution, although the space for the influence of politics on this branch of government has not been completely eliminated. Lack of enforcement remains the key obstacle to progress in critical areas such as media freedom and fight against corruption and organised crime. The way the activities from the Action Plans for Chapters 23 and 24 are presented and implemented confirms the previously acquired impression that, instead of the will to achieve substantial reforms, the Serbian government is in fact simply “ticking off items” in the process of Serbia’s accession to the European Union.

After a two-year stalemate, Serbia opened Cluster 4 (Green Agenda and Sustainable Connectivity) with four negotiating chapters at the end of 2021, which can be largely attributed to the hasty finish of the constitutional amendment process. However, although the Government of Serbia was preparing to open three more chapters from Cluster 3 (Competitiveness and Inclusive Growth), this has not happened. At the same time, the end of the year was marked by a series of incidents, and the inadequate reactions of the authorities caused concern in the country and abroad.

The authorities responded to the revelation of the brutal labour exploitation of Vietnamese workers in Zrenjanin with elements of human trafficking by denying responsibility and ignoring the case. Failed attempts to remove the mural of a convicted war criminal in downtown Belgrade in November led to attacks on human rights defenders, freedom of assembly was restricted, the state’s years-long lack of “dealing with the (war) past” was exposed, while the actions of extreme right-wing groups were tolerated. The attitude of the authorities towards the critics of the regime was manifested also before, during and after the environmental protests at the end of November. The police used various means to intimidate protesters, brought unlawful misdemeanour charges against them, and did not protect them from masked attackers armed with batons. The manner in which the demands of the protestors were finally accepted and swiftly implemented indicates that the division of power in Serbia has almost disappeared.

Presidential, parliamentary and local elections in Belgrade and 12 other cities and municipalities were held on 3 April 2022. Due to numerous election irregularities and insufficient knowledge of the rules, which were changed immediately before the elections, the final results of the presidential and Belgrade elections were announced more than a month later, and the final results and the distribution of seats in the Parliament are still pending. This also shifts the deadlines for the formation of the future Government, which may delay the implementation of reform activities.

Russia’s attack on Ukraine at the end of February 2022 caused tectonic changes to the European security structure. It reflected on the election campaign and will influence the formation of the post-election ruling coalition in Serbia. The consequences of this crisis are also important for the EU enlargement policy, especially in the context of three new applications for membership (those of Ukraine, Moldova and Georgia), as well as for the position of Serbia, which, apart from limited progress in Cluster 1, also has chronic problems with foreign policy alignment with the EU. Within the framework of Chapter 24, which prEUgovor monitors, this crisis brings a new wave of refugees and a boost for right-wing extremism as new challenges for Serbia. It is necessary that both sides of the accession negotiations confirm and promote the perspective of Serbia’s membership in the EU, in both words and deeds, including the implementation of reforms in critical areas of Cluster 1 in good faith.