What should change in the approach to reforms in Chapters 23 and 24 after the publication of the Enlargement Strategy?

Coalition prEUgovor will present its latest report on Serbia’s progress in implementation of policies in the areas covered by chapters 23 and 24 of EU accession negotiations, and provide the assessment of the EU and the Serbian government's approach to reforms in the field of rule of law.

By publishing the Enlargement Strategy, the EU announced the possible date of Serbia's membership in the EU, as well as a series of new initiatives to improve the rule of law and security in the Western Balkans. In addition, the Government of Serbia has adopted a new plan for harmonizing legislation with the EU and announced a revision of the Action Plans for Chapters 23 and 24. The main question that the coalition prEUgovor poses at this event is whether the proposed changes will substantially improve the rule of law, or the existing approach to negotiations in this area needs improvement.

Coalition’s proposals are based on insights gained through monitoring reforms in the areas of judiciary and fundamental rights (Chapter 23) and justice, freedom and security (Chapter 24), and presented as the semi-annual report - Alarm.

This event precedes the publication of the Annual progress report of the European Commission for Serbia which will be released on April 17th, and represents a unique opportunity for the interested public in Serbia to get an independent assessment of the situation in the field of the rule of law.

Conference speakers will include:

• Sonja Stojanović Gajić, Belgrade Center for Security Policy - how to apply new instruments from the Enlargement Strategy for substantial improvement to the rule of law

Translation to English will be provided. Please confirm your attendance no later than Thursday, April 12, by email to info@preugovor.org or by phone at 011 / 3287-226.

The event is a part of project "prEUgovor Policy Watch: Monitoring Reforms in Chapters 23 and 24", funded by the European Union. This conference is supported by the Embassy of the Kingdom of the Netherlands, within the MATRA program.

What Needs to be Changed in the Action Plans for Chapters 23 and 24? 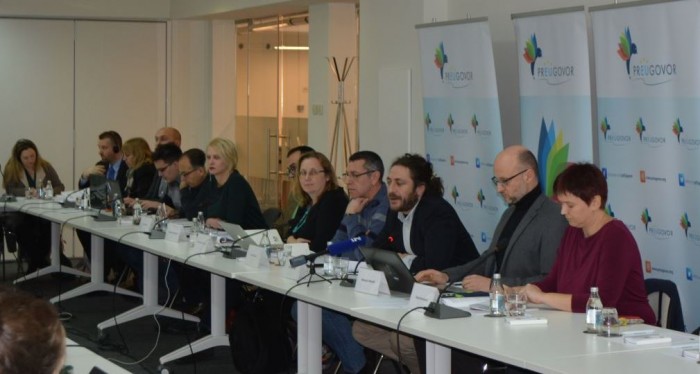